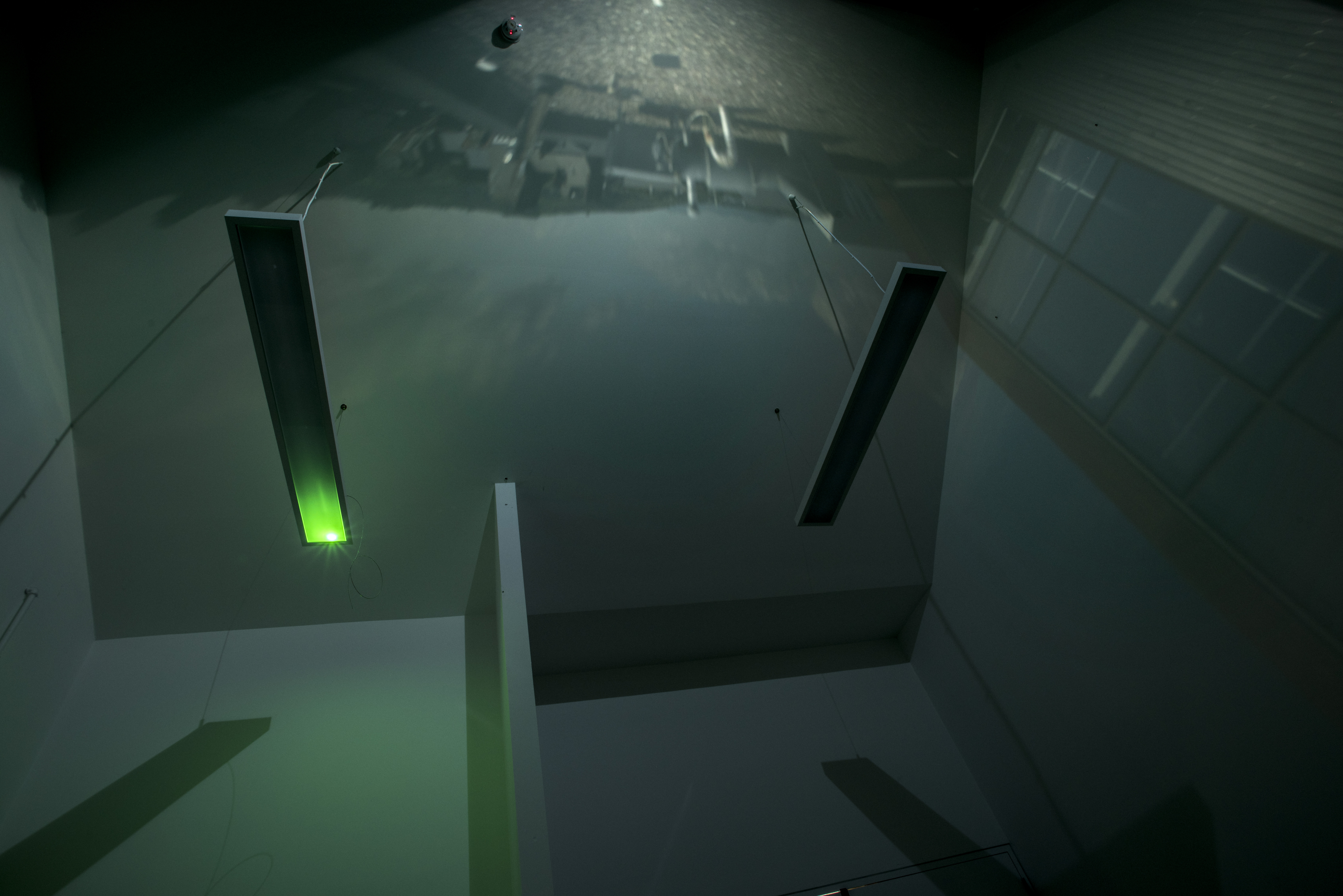 5 August to 31 October 2020
No booking required but masks must be worn and numbers are limited in the studio.

Whenever I think No Space, it creates an image of a place in my mind, in memory, in the foreseen future. Whenever I try to imagine what it might mean not to be in a physical place, I look around me, at the place where I am. When I think about subtracting I add a thought, a stream of thoughts, a mental space, a concept. There is the negative space, a space with its complementary shapes and forms, a place for the imagination to try to make sense from an absence. 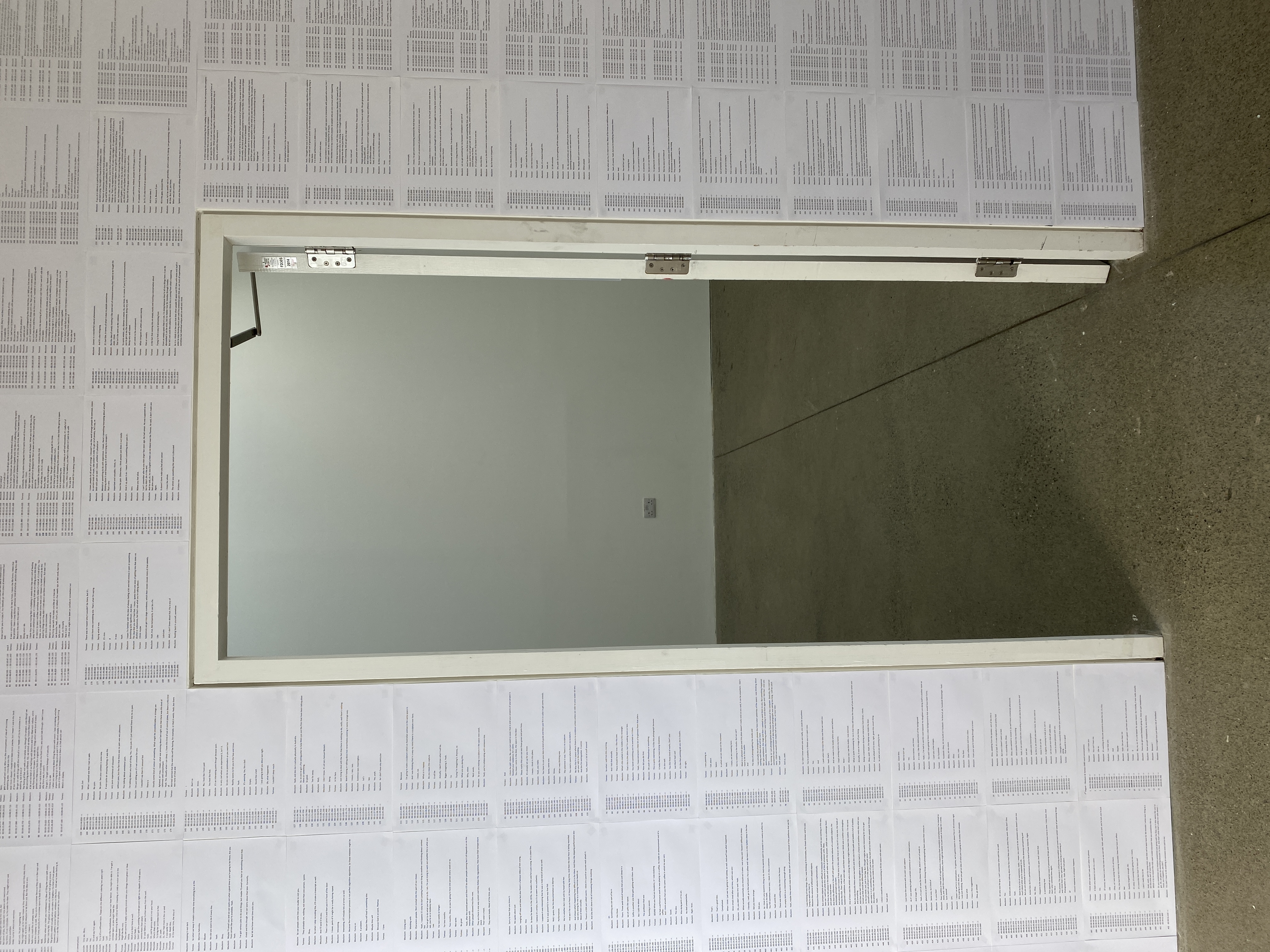 No space
a question
a motion
a feeling
conversation
absence
silence
fall
infinity
no concept
Friday 14 August - with Micheál O’Connell(UK)
Tomasz Madajczak and Micheal O'Connell met in the studio in Uillinn West Cork Art Centre via the internet for a week. Their interactions were questioning the relationship between physical and mental space, and a process of subtraction from an empty space. The conversations which appeared during their meetings were being recorded and transcribed by a digital algorithm, they created a margin outside of the entrance to the studio.

Away but near, isolated, a room, the garden, a space.
Private, secret, hidden, mine.
Relief, safe.... for a time.

Saturday 22 August - with Pattie Beerens (Australian)
Tomasz Madajczak met with Pattie Beerens by zoom in the studio for a period of a week. Pattie is an Australian artist, ceramist, maker who explores the diversity of suspended installations which are supplemented with pieces of fabric dipped in clay. Eventually the shapes become suspended sculptures created in relation to their environment and circumstances. Tomasz worked on a collaborative response in one of the studios in Uillinn West Cork Art Centre. https://www.facebook.com/uillinnwestcorkartscentre/videos/983845302134518/

Saturday 5 September  – live stream with Mairead Vaughan
This week visual artist Tomasz Madajczak will collaborate with dance artist Mairéad Vaughan as part of their concurrent residency’s at Uillinn: West Cork Arts Centre. Over a period of one week, they will enter into a durational practice examining process of ‘constructing and deconstructing space’ in Studio 3, at Uillinn: WCAC. Engaging with thread, surface, space, video and stone, both artists engage a live dialogue through their respective responses. This durational collaborative practice is open to the public to experience. https://www.facebook.com/uillinnwestcorkartscentre/videos/2676182169290655/

Saturday 19 September - with Silke Michels.
Tomasz Madajczak will collaborate with Silke Michels for a duration of a week to explore the meaning of absence and belonging, search and understanding of the environment in relation to the place of origin. The explorations will take form of multimedia exchange and a dialogue recorded by video and sound.
The place we are born from
The place we are born into
Recognition
Observation
Awakening awareness
Acceptance
Contentment
Understanding
Embodiment

No space, a concept that began with Tomasz Madajczak in the very beginning of the pandemic and was kindly shared with a collaborating artist from Pakistan.
Zainub Mawaz-Khan an academic, a gold medallist in her masters of fine arts program and an actively practicing artist for the last 2 decades joined Tomasz in his endeavour to discover the myriad ways in which the concept of No Space could be viewed.
It was decided that the work would be allowed to be fluid, both artists mutually agreed to have an open ended timeline for the pandemic had gifted them so much of it to self reflect.
Tomasz has a multi-disciplinary approach to his work, using video and photography, paint and projection. He had admitted to being out of touch with his "proper painting practice" for a good number of years and wished to return to the simple.
Zainub, also a multi disciplinary artist, using mixed media and in her artwork one can find the use of photography, puppetry and 3-dimensional objects, fibre and textile art, admitted to being technically inept, and was seeking to find a collaboration that would expand her love of abstract thoughts and becoming more mindful in her practices.
Tomasz's portfolio spoke volumes of his skilled eye for detail and his use of minimalistic approaches in his installations. A photography academic by day, his sensitive studies  of light and composition are snippets stolen from time, a shared moment in a space to which no names or titles are given.
Zainubs portfolio was a burst of multiple layers, physically and mentally for she prefers to allow the images to mature and deliberate upon them in her mind and research enough to be able to ultimately paint it.
Tomasz is exceptionally skilled in allowing the present moment to over take all his senses and sensibilities allowing for the hand to take centre stage and the mind allowed to wander. His practice is thus more calm and delicately sensitive which is an extension of his nature also. His palette is muted and brightened by a deep crimson among a sea of various blues. Each stroke lovingly laid down in repetitive movements layer upon layer.
Zainub on the other hand, allows her unconcious to guide her and admits to allowing the sheer joy of spontaneous bursts of creativity set her soul on fire using strong mark making techniques and bright, bold colors alot like her eccentric introverted self. As a single mother of two, she uses her art as her therapy and opts for large surfaces to permit her hand the freedom to challenge its limitations. She likens it to a performance. She moves with the stroke, she dances with the colors and can feel the sensuousness of the surface within her being.
Our discussions began with the understanding of learning competences, impediments in the general and art educational systems, an exchange of political ideologies,  and deliberations on our experiences of dreams and meditative practices. With natural progression to Freud's ego defense mechanisms and our understanding of the human psyche from Jung's works. Our next discussions revolved around the meaning behind our artmaking, how mythology, religions, belief system's had archaic symbolism, universal wisdom a meta- narrative.
We discussed the Suffiistic view of the human psyche, touching upon the very basic model of the psyche as offered by al-Ghazzali. We read Phaedrus and Aldous Huxley's works. Ghalib and Iqbal both exceptional poets of the Indo-Pak subcontinent.
In a private session, Zainub read an excerpt from her unfinished book which she shared upon which Tomasz recommended her to read Ursula K. Le Guinn's “The Birthday of The World” and “ The Left Hand of Darkness”
Zainub Mawaz-Khan is also the Director of  SELFWORKS (a school of professional and personal development) and arranged 3 online sessions to tackle the new challenges of the online environment. Students with no prior art experience and those with formal art training were invited to share the intimate open studio space with the collaborating artists. What became evident through these sessions was the healing power of art, a space thrice removed from reality, shared with  people who were millions of miles apart, yet existing for a brief moment-together. The therapeutic effects of making, physically creating art are undeniable. More than that, the positive affect that observing someone making art became a shared interest between the artists. The attendants were spurred by our activity to actually start doing!!! And that too in a virtual, non-tangible, almost non-existent, 'No Space.'
This created new contexts for both the artists to work with. And although they had decided to just allow the expression to guide them, this new experience led them to think about ideas of human nature and creativity. Greenberg was revisited by Zainub as was Abigail Housen whose ideas on visual thinking and the nature of creativity inspired her to complete a 3 layered art work of large scale (12ft x 3 ft each) upon which she had been working since march but had abandoned in late August for lack of clarity behind the symbolism she was using in the work.
Tomasz meanwhile had sent a video of their collaboration titled "Becoming a Painting" from which Zainub took cue and created a video of herself painting from behind a translucent sheet- only the shadows of her hand movements (like shadow puppets) being visible as she applied ink and paint, pastel and gelatos to the surface.
The recent discussions revolved around the concept of morality and death. Our questions revolved around the need for a good intent , evolving consciousness, clear mind and an open heart. The artworks created are still works in progress but if we chart the progress to date both in terms of reference and content, this body of work can only grow. Into what space?

Tomasz writes:
No Space
Becoming a Painting
A space, a boundary, a surface
Touch, presence
The experience the inner and the outer
The breath
Calm, motionless contemplation
Surrounded by the open
Space, No Space
Deep listening
To one self and a distant culture
A dialogue without language
A dialogue of touch
The light
Transmission of thoughts
States of mind, emotions
An opening into a confrontation
The inner and the outer create a resonance
Subconscious manifest it self
Words try to help
To feel
The energy of the colour

Zainub replies:
If i were to lose my gift of sight today, would i still paint? Would i still 'see' what i felt?
How would i depict the world i knew? Would I rely on the surfaces and textures of the materials I used, would it become heightened in its sensual pleasures or lessen?
And what would be my subject matter? It must be my inner landscape for what else could i possibly observe? I guess it would made up of all those bottled emotions and misunderstood feelings, the colors inspired by my own senses. The light fragmented just as it would glow and fade with the sunlight upon my lidded dim eyes.
I thought of this when i imagined my self as blind and in a space of no space actually.
Would the stillness of my sight encourage new ways of my being? Or would it awaken what i had never recognized before?

Words which describe our collaboration as offered by Tomasz:
Intuition, reaction, stillness, listening,  Attuning, being, connecting, meditation, looking for oneself, discovering the boundaries, crossing through, recognising, creating a dialogue.

Zainub offered:
No space,
A place of egolessness,
Of infinite inner peace,
A place to enjoy the present
Since no space occupies no time.
We find strength from our own being,
In this sanctuary, sans judgment,
From others or from yourself.
A space devoid of the displeasing,
Anger and Passion
Guilt or shame.
Envy or vanity
There is no space for the dark here,
For;
no space is made of light and knowledge
It does not concern itself with deadlines.

This project is supported by an Arts Council / An Chomhairle Ealaíon COVID-19 Crisis Response Award.